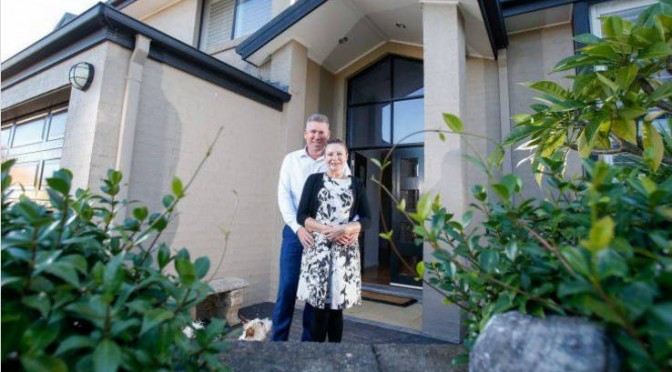 Mortgage costs are going up.

Although the Reserve Bank cut the cash rate twice during 2016, lenders have been increasing their mortgage rates. And experts are predicting more out-of-cycle increases.

But haggling can pay off, as Graeme and Kim Perry, who live just outside Wollongong in NSW, have found.

The couple’s home loan was on a 12-month introductory or “honeymoon” rate of 3.59 per cent with a smaller lender.

At the time they signed up for the mortgage the “revert” rate was 3.84 per cent. But by the end of the honeymoon period the lender had increased the revert rate to 3.99 per cent.

“I told the lender that they are advertising mortgage interest rates that are cheaper than mine.”

He pointed out to the lender that he and Kim have substantial equity in their home and they had never missed a repayment.

After a couple of discussions on the phone and hinting strongly that he was prepared to switch to another lender, there was still no joy.

But after Graeme initiated the switching process, the lender reduced the interest rate to 3.73 per cent.

Anyone who has not checked what their lender is doing and how that stacks-up against other lenders could easily be paying more than they need to.

The latest round of “out-of-cycle” increases over March has mostly affected property investors. That’s because the banking regulator has been forcing lenders to tighten lending to investors, who are behind the rapidly rising house prices in Sydney and Melbourne.

Three of the Big Four have increased their standard variable rates by up to 0.07 percentage points during March, while ANZ has not increased its variable rate for owner-occupiers.

Smaller lenders have mostly followed suit, though they still have lower interest rates than the big banks.

Sally Tindall, a spokeswoman for comparison site RateCity, says some smaller lenders start with rock-bottom interest rates and, as a result, don’t give themselves much leeway to offer discounts.

The big banks usually have more capacity to discount, she says.

“The big banks offer a wide variety of discounts based on loan-to-valuation ratio, borrowing size and history of repayments.

“The ‘ideal’ borrower can get up to 0.9 percentage points off their banks’ standard variable rate,” Tindall says.

“And, if you are content with the most basic home loan offering from one of the big banks, then you could get a rate that is over 1 percentage point lower.”

That especially after figures from CoreData this week showed “dwelling” prices, houses and units, rose by almost 19 per cent in Sydney over the year to March 31 this year and by almost 16 per cent in Melbourne.

This week Reserve Bank governor Philip Lowe blamed the too generous tax breaks for the property investors as well as lax bank lending standards for the explosion in Sydney and Melbourne home prices.

The Australian Prudential Regulation Authority, which regulates lenders, has been requiring lenders to tighten lending to investors for the past two years, but it may have to do even more to slow the growth of investment loans.

“I think that there is the potential for even more rate rises, particularly from more of the smaller lenders,” says Mitchell Watson, the research manager at Canstar.

And with the official cash rate set by the Reserve Bank at a record low of 1.5 per cent, the next change in interest rates, when it comes, could well be up, Watson says.

Almost 90 per cent of 36 economists and other experts told a survey by comparison site, Finder, that they expect the next move in the cash rate to be up.

Most of the experts say the out-of-cycle rate hikes by lenders allows the Reserve Bank to hold-off for longer before increasing the cash rate.

However, a rate rise isn’t likely to occur for some time with 70 per cent of the experts believing a rate rise won’t occur until 2018.

Shane Oliver, the chief economist at AMP Capital Investors, says that for the Reserve Bank to hike rates just to slow the Sydney and Melbourne property markets at a time of softness elsewhere would be “madness”.

“The arguments to cut or hike rates are evenly balanced and we can’t see an official rate hike until the second half of 2018,” Oliver says.

Canstar’s Watson says borrowers should be making sure that they have the capacity to meet repayments if there are higher interest rates.

Get a better deal

While the big banks have standard variable owner-occupier rates of 5.29 per cent, on average, there are many smaller lenders who have rate of well under 4 per cent.

Though you may never of heard of Reduce Home Loans, it is regulated to the same standards as other lenders.

Even though fixed rates have also been on the way up recently, there are still some competitive fixed rate mortgages at the moment. For example, the big banks have three-year fixed rate for owner-occupiers of just over 4 per cent.

Smaller lenders have three-year fixed rates of well under 4 per cent.

Some borrowers prefer fixed rates for the certainty of repayments, but they are less flexible than variable rate mortgages. If you have to break the fixed rate period because you want to upgrade, for example, you can be up for the economic costs to the lender of breaking the loan, depending on what interest rates have done in the meantime.

Mortgage Choice says fixed rate home loans accounted for only 21 per cent of all loans written by its brokers in March, down from 22 per cent in February.

“Given that home loan interest rates are rising, I am somewhat surprised to see a fall in fixed-rate demand,” says John Flavell, the chief executive at Mortgage Choice, which has the biggest network of mortgage brokers in Australia.

“There is no doubt that interest rates will continue to rise over the short to medium term. As and when this happens, I think we will see more borrowers looking for interest rate stability and security,” he says.

The story How to avoid squeeze of rising mortgage rates first appeared on The Sydney Morning Herald.